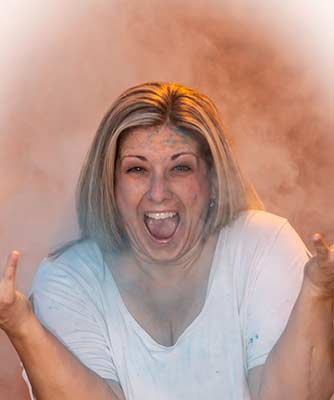 Amber Wittmers is originally from Scottsdale, Arizona and has been dancing for thirty-five years. Amber got her start in showbiz through beauty pageants and was Junior Miss America in 1986. This led to print work and runway modeling for Dillard’s, as well as modeling work for different hair styling shows around Arizona. From there, she continued her training in tap, jazz, gymnastics and ballroom. During her high school years, Amber trained with Rhonda Miller and went on to dance for Brian Friedman as a senior member of his competition company, Dance Vibes. She was also on the Varsity Pom line, at Saguaro High School, for three years. Amber was a scholarship student at Tremaine Dance Center and she spent a year training with choreographers such as Chris Dupre`, Chad Allen, Bradley Rapier, Joe Tremaine and Eddie Garcia. She worked for choreographers such as Michael Rooney, Marguerite Derricks, Doug Caldwell and more while also working for and assisting her long time friend and mentor Brian Friedman on several projects. After spending many years in Los Angeles, Amber moved back to Arizona to obtain her Bachelors Degree in business while also judging for dance competitions such as Dance Masters of America. Currently, Amber owns Adaptive Force Performing Arts in North Scottsdale, with her husband Mike. Together they train over 250 students weekly in Jazz, Tap, Ballet, Musical Theater, Hip Hop, and Acro in both recreational and competitive programs. Their dancers have had the privilege to dance on America’s Got Talent as well as with artists such as Janet Jackson, Becky G, Hailey Steinfeld, Disney’s Ruby Rose and More!