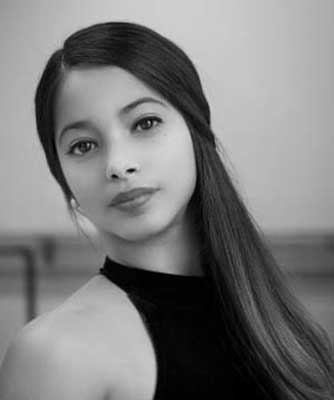 A native from Cuba, Yaimara Lopez began her ballet education at the early age of 5 years old, followed by professional training at the Ballet National School in Havana, under the guidance of renowned teachers such as Fernando Alonso, Ramona de Saa and Martha Iris Fernandez . During her education, she was awarded Third Place in the category of Female Variation in the International Competition of Academies in Havana. She joined the Cuban National Ballet in 2008, where she danced under the technical and artistic direction of Alicia Alonso and Ballet Masters such as Fernando Alonso, Loipa Araujo, Aurora Bosh, Mikhail Baryshnikov and Azari Pliseski. In 2010, she joined the Laura Alonso Ballet where she performed repertory that included soloist roles in The Nutcracker, La Fille Mal Gardee, Don Quixote, La Bayadere, Romeo and Juliet as well as participation in International Tours in France and Mexico. She moved to the States in 2014 where she started dancing with the Cuban Classical ballet of Miami and also with Florida Grand Ballet. Under the direction of Michael Pink, she joined Milwaukee Ballet for the 2015/2016 season, ballet performances included Dorian Grey, The Nutcracker, A Day in the Life (choreographed and rehearsed by Trey McIntyre) and Alice in Wonderland (choreographed and rehearsed by Septime Webre). In 2016, she moved to Arizona, where she has been teaching and choreographing for different Ballet Academies in the valley. She also is certified with Boston ballet as an adaptive dance instructor. She is passionate about helping kids to find their authentic selves not only as dancers but also as human beings.